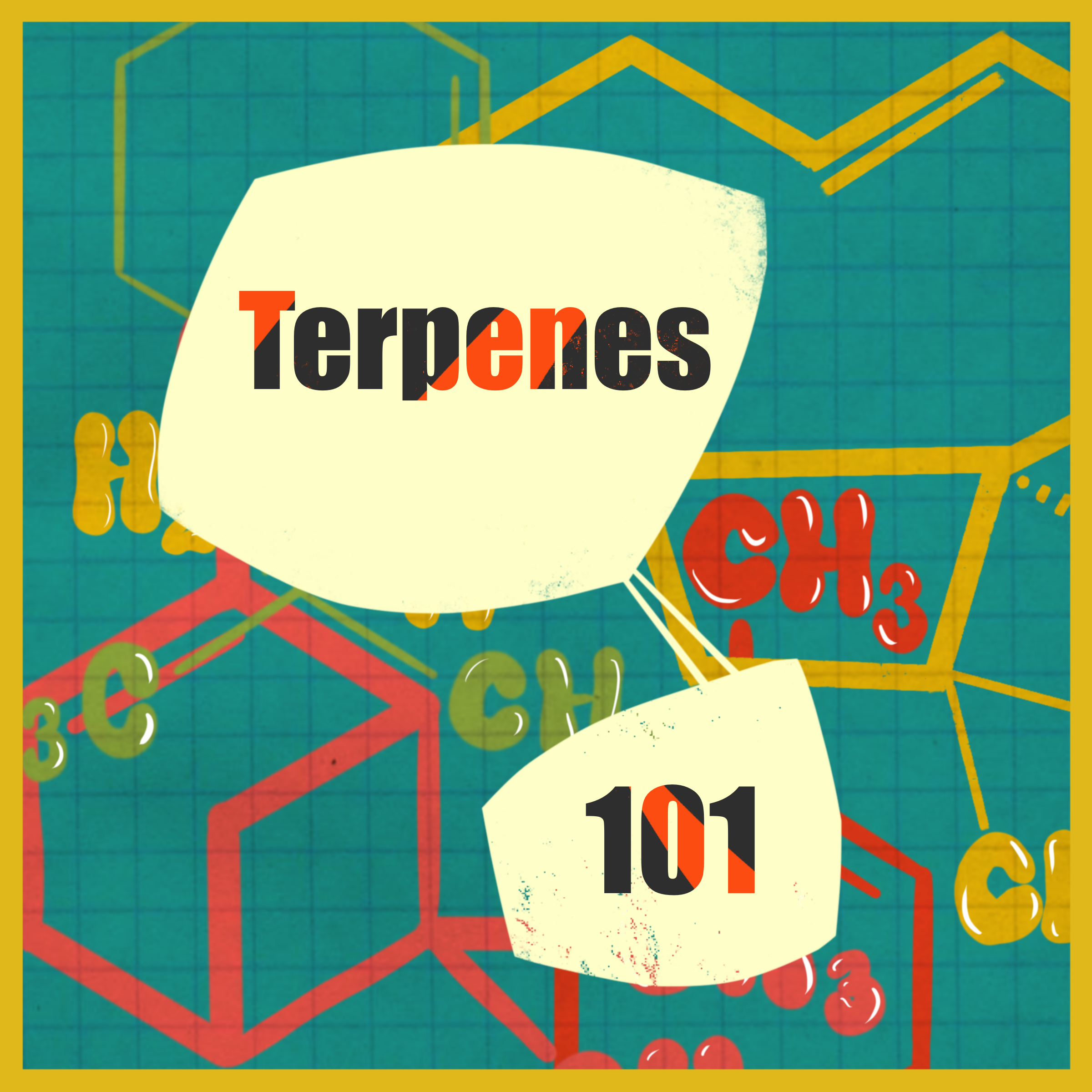 If you’re been reading up on hemp recently, you might’ve come to associate the plant with a whole slew of similar-sounding acronyms. There’s CBG, CBN, THCV, and more — not to mention the most famous cannabinoid of them all, CBD.

But hemp is more than just an alphabet soup of standalone cannabinoid compounds. Hemp and CBD also contain another very important group of molecules: the terpenes.

You can think of terpenes almost like essential oils. While they’re not exactly the same thing, most commercial EO’s are 70-90% terpenes by weight. Indeed, terpenes are responsible for the pleasant scents of essential oils and fragrant plants alike. Most of hemp’s terpenes are produced in the plant’s trichome-rich, flowering tops — just like its cannabinoids are.

And while the cannabis plant family is virtually the only known source of cannabinoids in nature (thus the related names), terpenes are ubiquitous. They’re found all over the natural world; in plants, trees, fungi, and even some insects! Terpenes benefit both the organisms that consume them and the (smaller) organisms that produce them, so much so that a leading research team from the Netherlands Institute of Ecology believes that “terpenes are the most popular chemical medium on our planet to communicate through.”

Back to ubiquitous-ness for a second: the fact that hemp produces terpenes isn’t what makes it so unique. As UVM professor of pharmacology Wolfgang Dostmann says,  “thousands of plant species produce terpenes.” Instead, it’s the unusual blend of hundreds of terpenes and dozens of cannabinoids that makes hemp so unusually effective. But more on that later.

For now, let’s take a look at some of hemp’s most important terpenes — and how their presence within full spectrum CBD oil may benefit your health.

Myrcene is found in many fruits and herbs, including mangoes, hops, thyme, basil. It’s also the most prevalent terpene found in many types of cannabis, and hemp is often no different. Myrcene’s most notable effect? Pain relief. A recent study of over 2,000 patients with over 20 different illnesses found myrcene to be excellent for chronic pain relief, so much so that it may explain why many people with pain choose to take medical cannabis.

Myrcene is also known to be anti-inflammatory, anxiolytic, muscle-relaxing, and sleep-promoting. It may also stimulate the body’s endorphin system to produce more feel-good endogenous opioids, further reducing pain. Kind of like how CBD stimulates the ECS to produce more endocannabinoids!

This pleasant terpene is among the most popular in the world. As you might expect, pinene can be found in pine trees, which likely helps explain why the ancient practice of forest-bathing is so effective. Along similarly-unsurprising lines, pinene is a common terpene in hemp, responsible for up to half of the total terpene content of some select ‘strains’.

What does pinene do? Generally speaking, it energizes and enhances one’s focus. Pinene is also a proven bronchodilator, making it great for those with asthma. Could pinene’s presence within hemp explain why smoking the plant is one instance where smoking doesn’t appear harmful? Possibly.

Linalool is most commonly found in Lavender, where it imparts qualities like peacefulness and calm. Those qualities aren’t just metaphorical, either — dozens of scientific studies confirm them, and lavender has been used for millennia as a sleep aid.

Research also reveals that linalool has neuroprotective qualities which may be especially good for Alzheimer’s disease patients. Like CBD, this terpene seems to be selectively anti-inflammatory.

Another specific-yet-amazing benefit: linalool may confer much of hemp’s seizure-reducing abilities. Studies from as far back as 1999 show that this effect is powerful and, like CBD’s mode of action, modulated by GABA.

Beta-caryophyllene (BCP) is found in all sorts of stuff, including cinnamon and black pepper. It’s antibacterial, anti-viral, anti-tumor, and anti-inflammatory — basically anti-anything bad.

And BCP is more than just a terpene: it impacts the endocannabinoid system so strongly that many researchers want to see it reclassified as a “dietary cannabinoid”. Indeed, beta-caryophyllene activates the body’s CB2 receptors in a way that’s reminiscent of what CBD does.

Note that real-world CBD oils may also contain caryophyllene oxide by virtue of their extraction methods. Thankfully, this terpene’s pretty awesome, too, with known anti-inflammatory benefits.

Limonene is found in lemons, limes, and grapefruit — basically in all things citrus — yet it’s also found in hemp.

Limonene’s strong point is gut health. More specifically, this terpene may reduce acid reflux and promote (appropriately) fast stomach function. Given that both health and disease often originate from the gut, it shouldn’t be surprising that limonene also has recorded pro-mood and anti-stress properties. It appears to work via elevation of serotonin levels, but more research is needed on cannabis-specific cases. Like so many other terpenes, limonene may even be anti-cancer.

And though it’s rare to find hemp flower that’s ultra-high in limonene (most ‘strains’ contain less than one percent of it), a little goes a long way.

When taken at face value, these terpene-related benefits might seem impressive enough. Yet many terpenes interact with each other, too, effectively turning their ingester’s body into a holistic chemistry set.

But nature knows what it’s doing here, and we’re happy to report that terpenes really do work better in pairs. Also note that terpenes share a small, simple molecular structure that allows them to boost the absorption of many other molecules — including CBD and related cannabinoids.

While CBD itself is all the rage right now, look for the popularity of hemp’s terpene component to rise in the future. It may only be a matter of time until terpene-specific hemp ‘strains’ became commercially available. Might this same level of specificity reach the CBD oil market? It could be awesome: imagine a standardized myrcene-rich CBD oil for sleep or a limonene-infused, lemon-haze-derived CBD oil for focus and energy.

Only time will tell whether or not the CBD industry as a whole opts to go this route. In the meantime, all of us can still enjoy the diverse blend of terpenes found in premium CBD.